In 2011, Google released the first Panda algorithm update which was developed to reduce the prevalence of low-quality and thin content and to boost unique, relevant content in search results. Later in 2012, Google would release another update called Penguin which was aimed at decreasing search engine rankings of sites that were deemed to be spamming its search results (specifically those buying links). Both updates have been maintained in the years since their release and some eCommerce sites have run into issues as a result.

1800Doorbell.com sells unique and innovative doorbells and other accessories for the home.

Prior to partnering with Inflow, the site was hit by both Google’s Panda and Penguin algorithm updates, which caused organic traffic to drop by two-thirds. Additionally, they had launched a new site in 2013, which was built in a way that made it susceptible to Google’s Panda algorithm, as the amount of indexed pages increased dramatically.

Upon completion of a thorough Content Audit, multiple issues were identified. These included duplicate and thin content, as well as indexation bloat. Additionally, shortcuts were taken by a previous agency when building the site’s backlink profile. This resulted in a large number of links from low-quality sites, which was aggressively penalized by the Penguin update. As multiple algorithm updates were rolled out through 2013, the site was repeatedly penalized by more Penguin updates.

Penalty analysis of analytics using the Penguin Tool by Barracuda

We brought our Content Auditing experience and technical know-how to the job for 1800Doorbell.com. After performing a Content Audit, several issues were revealed. We fixed internal crawl errors by either redirecting or removing the links. Building on that, our team went through and found all internal redirects that were causing issues and made recommendations or fixed each one.

To address the dramatic increase in pages that were created when the new site launched, our team helped implement the strategies recommended in our Content Audit. These included pruning low-quality pages, consolidating similar pages and improving key pages. The improper use of canonicals was also resolved.

To address the issues related to Penguin, the most important part of recovery was link cleanup, which consisted of analyzing backlinks to identify low-quality links and requesting they be removed with a disavow file.

As a direct result of our work, year-over-year transactions from organic traffic were up 83%, and revenue has increased more than 96%. Average order value has increased, as well. 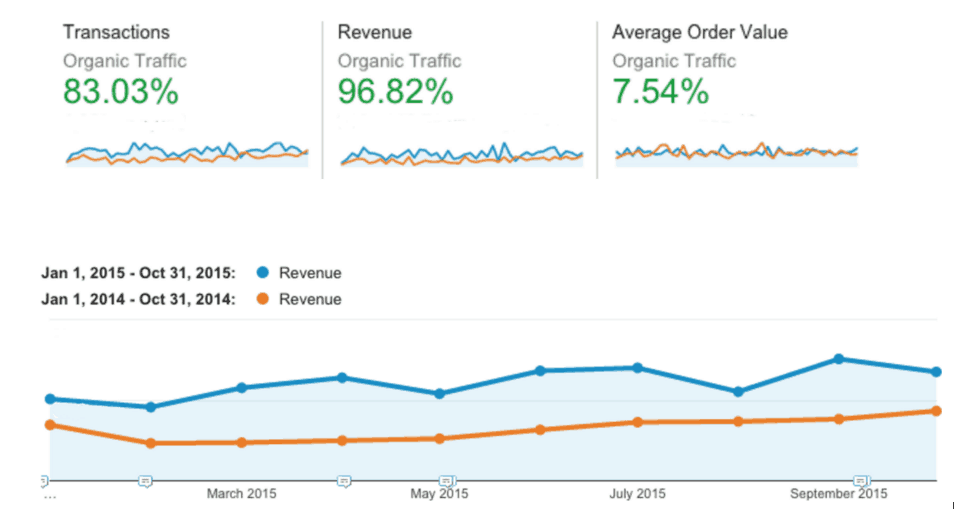 Organic sessions during the same time period are up ~101%; this shows the increase is quality traffic, as revenue increases are almost on par with traffic increases. You can see where their past year traffic (the orange line) was much lower than 2015 (the blue line). Year over year, their revenue from organic traffic was up more than 96 percent.

Has your site been negatively impacted by a recent Google algorithm update? If suspect that might be the case, feel free to call in our team of experts to help by filling out the form below.

This article was written by a member of the past or present Inflow team.