When we talk to eCommerce brand owners about Facebook Ads and Instagram Ads, we hear the same two questions over and over again:

The truth is, there is no universally accepted maxim when it comes to answering either of these questions.

Fear not, however. In times of darkness and uncertainty, turn to the Bat Signal. To quote the inimitable Batman, “Sometimes truth isn’t good enough. Sometimes people deserve more.”

We heartily agree. eCommerce brands, stores and business owners deserve a Facebook advertising partner that will go full-tilt in discovering the answers to these questions for each unique partnership.

Here’s what we did:

Spoiler alert: We helped Vitrazza eclipse the daunting $1 million revenue mark within a one-month period and experience a 90% increase in total sales YoY.

Vitrazza Glass Chair Mats came to us with a scale issue. They were looking for explosive sales growth and recognized that Facebook and Instagram ads presented the opportunity to do so. At the time, they were running Facebook ads around a $1,500/month budget, with 90% of spend going to remarketing lists.

Vitrazza wanted us to answer their questions on creative and scale with results, not theories. Their goals:

We had the winning combination to launch our strategy.

At Inflow, we deploy a proven full-funnel approach to paid social ads. Given Vitrazza’s growth goals, it was clear we could leverage Facebook Ads to reach new audiences with our “See, Think, Do” framework.

Vitrazza had a gold mine of content to work with, including some high-end photo shoots, TV-production-value commercials, and no shortage of customer testimonials. Our first step: Get the content organized and outline a plan.

We knew Vitrazza Glass Office Chair Mats were not an impulse buy. We also knew that a successful tagline for Vitrazza was “Glide into office elegance.”

All this is great, but elegance and user-generated content don’t typically go hand in hand. How could we diversify the creative ad mix to include UGC elements and high-production-value content, whilst upholding the integrity of the “Office Elegance” vibe?

First, we took off the bat cape and turned back to Bruce Wayne as we stepped into the mind of the consumer and mapped out the purchase journey. What message did someone in the first phase of the funnel need to see and hear to move on to the next?

Video works well to introduce a brand or product for nearly any industry or niche. But it couldn’t be just video for the sake of video. To be successful on Facebook and Instagram, our ad creative needed to follow some basic guidelines:

So, we got to work. We tested a highly produced spot vs. a low-production-value video to see which would perform better.

Wouldn’t you know it: The lower-production-value video (right) won in both volume of sales and ROAS.

This was critical information. Now that we knew the success of quick, low-production-value ad creative, we were ready to test out its possibilities with user-generated content.

Getting that content was the first challenge. We worked with Vitrazza to identify incentives for users (specifically, gift cards) to provide video testimonials with their smartphones.

UGC content that is recorded in a square or horizontal format lends itself best to the mobile feed placements on both FB and IG. These tend to work better than vertical video, so we made the criteria clear to those we requested content from.

While the initial goal was to extend the reach of our audience in an authentic way, the content ended up surpassing our expectations. For example, this video (featuring Mark, a happy customer) was able to spend $17,352 and hit a 4.2X ROAS.

Even when you have a beautiful, higher-end product like a Vitrazza Glass Chair Mat, UGC is certainly worth testing in your Facebook and Instagram ad campaigns. It helps substantiate the product and provide social proof, which are critical in the consumer decision-making process.

Showing off relatable content — where viewers think, “I had that same problem with plastic mats,” or “My office looks so similar to that; the glass chair mat would be a great addition” — helped us drive more spend and reach more qualified users.

Creative, while one of the most important factors in the success of your campaigns, is not the only piece of the puzzle. Understanding which audiences are performing best with that creative is the jet fuel which keeps the Batmobile performing.

Facebook and Instagram offer a multitude of targeting options to reach the right audience. We started with some of the historical must-haves: 1% lookalike of purchasers, “add to carts,” and “view contents.” We also used email lists Vitrazza had collected via Klaviyo to build lookalikes. This included an all-time purchaser list and a high average-order value (AOV) list.

We used the traditional Ad Set Budget (ABO) method: set equal budgets across the board (so long as the audience sizes are similar) and let them run for a couple of weeks, unless we saw a clear opportunity to intervene.

When we identified the winners, we started to increase the budgets on the winning ad sets, utilizing an incremental approach (increasing by 15% every few days). We used automated rules within Facebook to do this. If the ad set had a certain amount of conversions, under a certain CPA, we’d give it the old budget bump.

Once we had time-tested, lookalike-percentage-tested seed audiences, we took lookalikes of the top 3–4 seed audiences and clustered them into an ad set. This supercharged performance and let us scale further beyond the traditional segmentation model of lookalikes.

As we were scaling spend up, Vitrazza was experiencing massive sales growth, which meant more robust Klaviyo lists and segments. We built new segments by pulling in more recent purchasers, breaking out bigger lists based on repeat purchasers or those who were two times the AOV, and uploading the value of the purchase data. We synced this into Facebook — and new, powerful lookalikes with associated values were built.

Lastly, once we had the Purchase event on the Vitrazza Facebook pixel really humming, with our top creative and ad copy combinations dialed in, we took our best performers and ran them against a broad audience, with essentially zero targeting parameters.

That’s right, Robin. We trusted in Vitrazza’s offer, creative, and ad copy, and we trusted Facebook to go out and find purchasers for us.

Using socially proofed ads (where we grabbed the post IDs of top-performing creative), we launched broad targeting with cost caps. We set the cost cap about 10% higher than what the target CPA goal was to give the algorithm more opportunity to deliver the ads to the right people. Because we were also pulling in the value of the purchase event, we were able to test and optimize ad delivery for a minimum ROAS threshold.

A helpful hint: Pairing a clean naming convention with clean UTM parameters on the back end of the ads helps with ease of reporting and gives you maximum visibility into performance.

In short, dialing in on creative and audiences helped supercharge Vitrazza’s sales and allowed us to scale the account — while still exceeding client goals.

We learned pretty quickly that UGC was a great way to scale the account. But we also knew that we were in need of additional content, because the new UGC content coming in couldn’t keep pace with the rapid growth of the account.

So, Vitrazza turned to the deep blue ocean that is influencer marketing. In collaboration with our strategists, they identified traits and qualities of ideal influencers that would work well for their paid Facebook and Instagram ads.

Vitrazza was able to partner with these amazing influencers, each with their own loyal, distinct fanbase. We ran these in separate campaigns within Facebook and Instagram and tagged each of the respective influencers. This enabled us to reach new audiences with our targeting and add an extra layer of social proof to the Vitrazza brand.

The posts have all performed well, but the Chris Han photo has produced at the highest level with over $39K in spend and a 4.9x ROAS!

All of the influencers individually produced over 2.3x on cold traffic.

We were sending a lot of highly qualified users to the site with strong purchase intent, but we still needed to round out the paid social strategy with the “Think” and “Do” phase — otherwise known as remarketing.

Average conversion rates on a last-click basis for eCommerce fluctuate, but a safe bet is that they’ll be between 1–2% depending on industry. That means 98–99% of your audience is coming to the site and NOT purchasing. A good remarketing strategy is imperative, especially with a higher-price-point product like a Vitrazza Glass Chair Mat.

For Vitrazza, we set out and expanded remarketing efforts by segmenting audiences based on activity or inactivity.

We built a “Think” campaign, or a mid-funnel campaign where users have demonstrated some level of intent with the brand. This included video viewers from our See audiences; Google Click ID users; content viewers within three-, seven-, and 14-day windows; Facebook engagers; and Instagram engagers. We oriented our creative on proof, pulling in additional customer testimonials or really driving into some of the key value propositions which solve consumers’ pain points.

For the Do phase, we focused primarily on users who had added to their cart. We staggered the audiences by five, seven, 14, and 21 days. In this phase, our creative was much more offer-driven, highlighting the discounts and special offers. We also focused heavily on the product as opposed to lifestyle images.

The key here is to frequently switch out the creative and give users a fresh look at the brand. Because this is the smallest part of the funnel with the fewest number of users, keeping fresh creative helps reduce ad fatigue and drive down frequency, while increasing returns from 10x to 19x.

Just as Batman said, a hero can be anyone. In this case, the hero was Vitrazza.

They went all in on testing a variety of content, including UGC and influencers. They allowed us to be nimble and trusted Inflow to provide the best recommendations based on our testing data.

The result: We scaled the account from $1,500 per month in Facebook ad spend to over $34,000 and counting, all while exceeding ROAS goals.

Since our partnership, Vitrazza has consistently achieved record-breaking revenue numbers, month after month, including their first $1 million month! Beyond the directly measurable impact, we’ve seen uplifts in their branded search queries and organic traffic, which we also saw in our Seltzer Goods Paid Social Case Study.

With over a quarter of a million dollars spent on Facebook and Instagram and a 4.2X ROAS, the See, Think, and Do strategy for Vitrazza has worked out great. It can work for your brand, too.If you’re looking for a Facebook Ads agency partner to help you get similar results, request a free proposal from our team now. 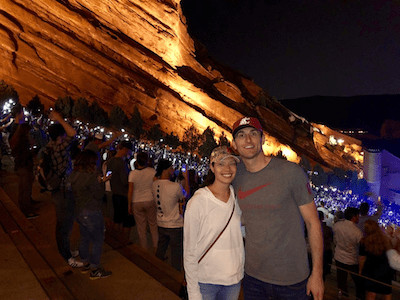