Can you find patterns when analyzing their Facebook ads? And what can you find out from their eCommerce Facebook ads that you could use to improve your business?

Facebook recently added a feature where you can go to any page and see what Facebook ads it currently has running – a helpful insights tool that was instrumental in our research:

Let us be clear that the data set we used for our Facebook ads research is a representative sample of Facebook ads being run by top eCommerce companies.

We spoke directly with representatives at Facebook about what we were seeing in our Facebook marketing research. They confirmed to us that they don’t show all ads that a page might be running.

For sites with a large number of ads (like Amazon, for example), there can be far more ads running than shown by Facebook in its listing. This is partly because there can be many variations of each individual ad that change based on dynamic targeting, retargeting, and many other factors.

As a result, Facebook often shows a useful representation of the ads being run by a page, especially for pages with lots of ads.

Since a complete collection of ads was impractical, we used Facebook’s representative data set of ads being run by the pages in our research, which still yielded a number of interesting insights and results as you’ll see below.

To do this, we used a list of the top 50 eCommerce companies by annual revenue compiled by eMarketer and collected ads from their Facebook pages. The complete report is behind a paywall, but you can see a list of the companies (several of them competitors) and their revenue here:

We made sure to look at all the Facebook pages a site runs. We also excluded a few companies that are conglomerates of smaller eCommerce sites, such as Ascena Group and L Brands.

Before we begin, we want to define some basic terms: 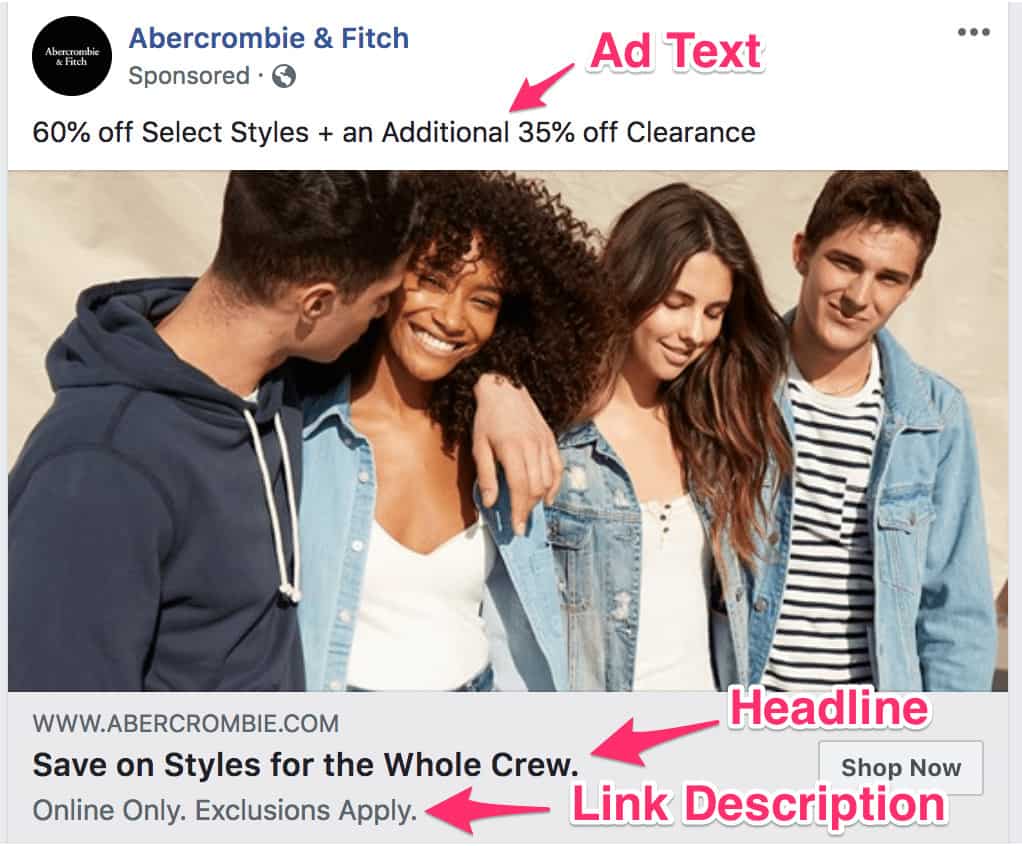 Here are the highlights of what we found in the research:

Note: Running an eCommerce store? Talk to one of our ad experts about how we can help you setup and optimize your paid social and/or social media campaigns. Contact us here.

We manually analyzed the purpose of each of the ads and found that 336 of 350 ads (96%!) were designed to encourage someone to make an immediate purchase.

The most common ad was simply one displaying a specific product:

We also found many ads that mentioned a category or theme of products—rather than an individual item.

One of the few companies that created a Facebook ad solely to promote their brand was Walgreens. One of their ads was a video of how a store helped the community after a natural disaster:

That was the exception, not the rule. The top eCommerce brands seem to be using Facebook ads almost exclusively as a way to convince people to buy something now. Most are not using ads as a way of building their brand presence.

After Facebook decreased the organic reach of Facebook pages, there was speculation that brands would be forced to pay to get decent traction on their Facebook pages.

The Ad Texts Usually Had No More Than 2 Sentences

While a lot of the advice online will tell you to keep your ad text short, eCommerce ads tend to be much shorter than ads in other industries.

AdEspresso analyzed Facebook ads across many industries. Here’s how the eCommerce Ads compared:

When making eCommerce ads, brevity seems to be even more of a focus than for regular ads. We consistently noticed that the ad text was usually one distinct call-to-action:

That resulted in ads that were mostly brief, to-the-point product mentions with a simple call-to-action.

Most Headlines Were Under 5 Words

When we looked at the number of words in headlines, we again saw how important brevity is. These companies were sure to make every word count.

One of the reasons for the high amount of ads with no headline is because many video ads did not contain a title:

The sole purpose of this ad is to get the audience to play the video. Anything that would distract from that purpose has been removed.

Keep in mind that Facebook automatically cuts off headlines that are too long. Some of the ads we saw didn’t respect Facebook headline limits, resulting in ads that may not be clear to consumers.

In general, however, when we looked at the character length of the headlines, we saw that they were mostly under 30 characters. They also tended to use short, simple words.

Most Ads Contained No Link Description

Most of the ads we saw didn’t use the link description field. The ad text, headline, and image were the only fields they used.

This was not universal, however. There were a number of brands who leveraged the link description field, especially to mention shopping benefits such as free shipping and returns.

What Are the Most Common Call-to-Action Words?

We looked at the most common words in headlines to see what tips you can use for your Facebook ads. We excluded standard words like “and”, “a”, and “the”.

As expected, most of the common words were about deals or cost. Marketers frequently used phrases like “up to X% off”, “flash sale”, and “no-cost shipping”.

There were a few exceptions. The reason “air” and “vapormax” occurred nine times is because Nike ran nine ads promoting the Nike Air VaporMax 2 shoe:

The words “engagement” and “ring” appear eight and seven times respectively because Blue Nile’s ads are centered around engagement rings:

Almost none of the companies we studied were running different ads for the same product. They also seem to be careful to differentiate their headlines. This is important to prevent Facebook ad fatigue—the phenomenon of Facebook ads doing worse over time and seeing decreased click-through rates as an audience gets continually exposed to the same ad.

Most Ad Images Had No Text

When we looked at the photos of ads with one image, we saw very few that put text on the photo, and top eCommerce companies seem to prefer to use untouched, professional images.

Consider two discount ads. This one contains 11 words of text on the image:

And this one contains no text on the image:

Most of these eCommerce companies ads used the second approach: having a clean image and putting the call-to-action in the surrounding text.

Carousels Were the Most Common Ad Type

Carousel ads were the most common type of ad run by these companies, followed by image ads and then video ads. This makes sense for an eCommerce company as a carousel allows you to display the images of several products in one ad:

Also you can make your last slide a general call-to-action to your site. A pattern we saw in nearly every carousel:

Most Carousels Had More Than Five Images

When we measured how many images were put in carousels, we saw that most carousels contained more than five images:

Here are our biggest takeaways regarding the best Facebook ads for eCommerce:

While we set out to research Facebook ads for eCommerce and all of this our data is interesting, it’s also true that we can’t say from this research whether the ads these companies are running are successful at driving sales.

Our experience working with a wide variety of eCommerce sites has taught us that any PPC strategy should be highly customized to match the market you’re trying to reach with your efforts.

For example, it’s tempting to copy what Adidas is doing, but selling shoes and apparel requires different strategies than you might use to sell trail cameras to hunters and outdoor enthusiasts.

Even so, the fact that almost all of the biggest eCommerce companies are investing in Facebook ads is a strong hint that—for at least some of these companies—the ROI is there to justify the investment.

Note: Need a better Facebook advertising or eCommerce paid advertising strategy? We’ve worked with dozens of top eCommerce companies and can help you create campaigns that make sense for your business. Contact us here. 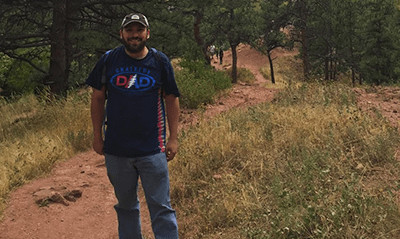 Mike Belasco has been an entrepreneur and digital marketer since 2003. He’s been the CEO of Inflow (founded as seOverflow) since 2007 and has led Inflow to five Denver’s Fastest-Growing Private Company awards and three Inc. 5000 awards. In 2009, he also founded ConversionIQ, which was acquired by Inflow in 2014.